What Are The Differences Between Flat Vs Apartment? : A Brief Guide

The words flat and apartment are often used interchangeably. While both represent very similar meanings, there are a few differences between the two. The primary difference is that the term 'apartment' is used in the US, while 'flat' is used in the UK. The following brief aims to capture various aspects of a flat vs apartment.

It is common for someone to seek apartment and flat differences, especially when planning to purchase a residential space for personal use. While both terms usually represent a type of livable space or property of residential use, some aspects differ. It is pretty helpful to understand these differences, albeit not significant.

What is a flat?

The flat is a name given to a type of residential space for personal use. It comprises several rooms under the same roof. The flats are segregated on different floors of the same building. Structurally, flats are a part of standalone buildings with no more than one flat on each floor. However, this theoretical definition may not always stand true in the Indian markets.

What is an apartment?

The significant difference between a flat and an apartment arises from geographical location. The geographical location here is not the location of the flat or apartment but the regions of the United States of America and the United Kingdom. American English is more inclined towards using the word "apartment" when referring to the living space described above. However, British English refers to the same living space as a "flat."

In addition to these linguistic differences, a few other factors may influence an individual to use one of these words. Let us understand what these factors are:

1. Overall structure: While the living space that both these words define is the same internally; however, their overall structure may influence the selection of terminology to describe them. For example, a residential space comprises different rooms under the same roof and on a specific floor. It may be termed a "flat" when each floor consists of just one flat. On the other hand, a similar living space would be called an "apartment" when there are multiple such living spaces on the same floor.

2. Standard of living: There is a notion that an apartment usually refers to a living space that is a bit more luxurious than a flat. An apartment may consist of a larger carpet area, luxurious amenities and a better appearance. On the other hand, a flat is a bit more basic and would share standard features with the other flats in the same building. However, this guiding principle may not hold in all cases, and the readers are advised to use discretion.

3. Regional influence: One of the critical aspects of using one of these words is the regional influence on the person using it. The continent of North America uses the word "apartment", whereas the regions of Britain and some parts of Europe prefer to use the word "flat." With the world being closely interconnected in modern times, a regional influence is no longer restricted to that particular region. Either of these regions can also influence residents of India through their education, travel or just by their daily interaction with work colleagues.

Does the terminology impact your home loan application?

The short answer is no. The home loan application is not evaluated by what name the property is defined but more so by other vital factors. A lending institution will not focus on whether the applicant is buying an apartment, flat or any other property type. The evaluation is more focused on the applicant's creditworthiness, repayment capacity, and the valuation of the property, irrespective of the name used to define it. However, it is advised to be clear about the property you want to invest in before applying for a home loan. While it may not matter to many individuals whether their choice of property is a flat or an apartment, some applicants want to be sure about it. Individuals can distinguish between an apartment and a flat by looking at some finer things.

However, individuals purchasing a new home should not worry about their loan application, even if they are unsure about their property being a flat or an apartment.

As emphasized above, a flat and an apartment do not differ much. Both these words define a very similar type of living space. However, the regional influence significantly impacts the usage of both these words. British English describes it as a flat, while Americans prefer to use the word apartment. The Indian property market is not very fussy regarding the usage of these words. The brokers and existing house owners may use these terms interchangeably. However, individuals who want to be very sure about the terminology that defines their living space can follow these guidelines.

It is also advised that individuals do not spend their time and energy conducting extensive research about the usage of the correct terminology. It does not impact the process of applying for a home loan or a loan against property. The valuation of the property and the overall profile of the applicant holds high significance, irrespective of whether it is a flat or an apartment.

The bottom line is that the terminologies are used interchangeably in India. Using either of these words outside India depends upon the geographical region.

(0)
0
What Are The Differences Between Flat Vs Apartment? : A Brief Guide 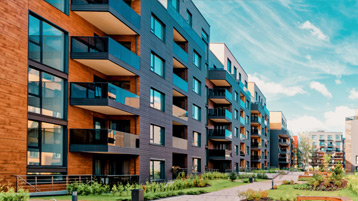